History of the University 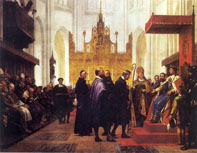 With its more than 530 years, the University of Copenhagen is one of the oldest universities in Northern Europe. Being the largest institution of education and research in Denmark, the University has gone through numerous changes through the ages.

The University of Copenhagen was inaugurated on June 1st 1479, after King Christian I was granted approval for its establishment by Pope Sixtus IV. Based on a German model, the university consisted of four faculties: Theology, Law, Medicine and Philosophy.

As was the case with all other medieval universities, the University of Copenhagen was a part of the universal Roman Catholic Church. From an organisational point of view, the University we find in the statutes of 1479 differs very much from that of today. The University was an academic republic with its own laws, courts and prison systems.

The advent of the reformation in 1536 meant a radical change in the position and role of the University in Danish society. But from the organisational point of view, the university was to remain an academic republic along the lines of the medieval model far into the future. Thus, it was not until 1771 that the university lost its own jurisdiction. And only in the second half of the 20th Century did the last traces of what was called "professorial power" in the 1960s finally disappear.

From the inauguration in 1479 until 2004, the university was led by a Rector and a Consistory. The form of governance has changed over time due to the passing of new laws and innovations. The most radical alteration was that of 2004/2005, where the Consistory was replaced by a Board of Governors.

Where we consider research and teaching to be two equally vital parts of the University's activities today, teaching was clearly the more important of the two in the Middle Ages, and this also applied to the University of Copenhagen. Even though significant scientific results were attained in older times, it was not until the end of the 1700s that research began to have any real impact as one of the two main elements in the life of the University.

From medieval doctrines to modern science

The charter of 1788 set the terms of reference for the University's transformation, from a classical European university, into a modern institution for research and education. Moreover, the 19th Century marked the beginning of a hitherto unfinished phase of growth.

The University of 1788 had a teaching staff of about 20 permanent teachers and around 1,000 students. By 1900, the numbers had grown to about 60 and roughly 4,000, respectively. At the beginning of the 21st Century, the University of Copenhagen, with its 38,000 students and more than 9,000 scientific, technical and administrative employees, its more than 100 educations distributed over as many departments and other sections, stands forth as Denmark's largest educational institution.

Read the book about the history of the University of Copenhagen.

A number of researchers at the University have achieved such remarkable research results that they have been awarded the Nobel Prize. Learn more about our
Nobel laureates.